Hong-Wu (also known by his given name Zhū Yuánzhāng) was the Emperor of China between 1368 – 1398 CE. He was the first Emperor of the Ming Dynasty, leading an Army that conquered the country and defeated away the Mongol-led Yuan Dynasty.

Despite being a non-Muslim, Hong-Wu ordered the construction of several mosques in Nanjing, Yunnan, Guangdong and Fujian. He rebuilt the Jinjue Mosque in Nanjing and large numbers of Hui (Muslim Chinese) people moved to the city during his rule.

He had around 10 Muslim generals in his army, including Chang Yuchun, Lan Yu, Ding Dexing, Mu Ying, Feng Sheng and Hu Dahai. In addition, Hong-Wu’s spouse, Empress Ma, descended from a Muslim family while he was originally a member of a Muslim rebel group led by Guo Zhixin.

Emperor Hong-Wu wrote a 100 word eulogy praising Islam, Allah and the Prophet Muhammad which he had placed in the mosques which he ordered to be built.

The eulogy is in the form of a poem, each verse containing 4 words (characters) and 4 syllables. In the translation below I have strayed away from trying to keep the 4 word per verse translation in favour of a more literal translation which conveys the full meaning in flowing English. 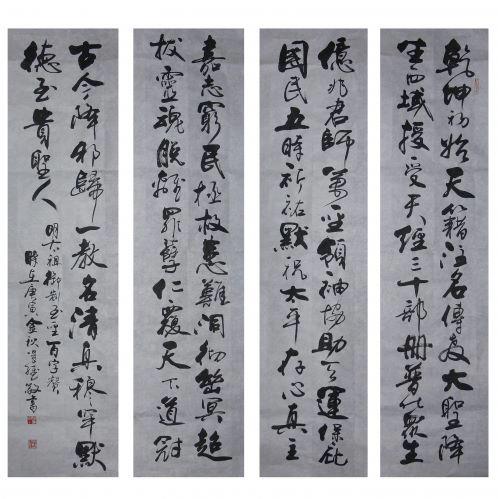 Since the creation of the Universe,

God had decreed to appoint,

From the West he was born,

He received the Holy Scripture,

A Book of thirty parts,

To guide all creation,

Master of all Rulers,

Leader of Holy Ones,

With Support from Above,

To Protect His Nation,

His heart towards Allah,

Saving them from calamity,

Seeing through the darkness,

Away from all wrongdoings,

A Mercy to the Worlds,

Vanquishing away all evil,

His Religion Pure and True,

The Noble & Great one.